Formula D Round 3 Heads to Miami!

It’s been a topic in the paddock for a while now about the dislike of Palm Beach International Raceways makeshift drift course and it’s disconnect from any major population as it’s hosted the last three, and only, events for Formula D in Florida. It was first noticed at the official Formula D 2014 season press release, held at SEMA, that Round 3 only mentioned Florida and not PBIR or a city, we now know that city and track! Formula D released the first advertisement for the 2014 season and it lists Miami, Fl’s Homestead-Miami Speedway! Hopefully this venue has a much better setup and reception from the drivers than PBIR did. 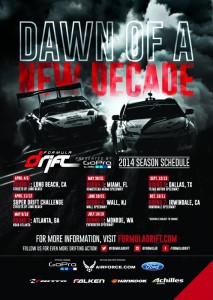