Rhys Millen had a slow start to the 2012 season but with experience, aggression and consistency in his corner mounted a late season comeback to take 3rd place in the overall points game. In addition Rhys also drove his same Formula D Hyundai Genesis to set a Pikes Peak hill climb record. However in what may have been some of the biggest Motorsports news this season was when Hyundai announced that they were pulling out from North America Motorsports leaving Rhys without a 2013 title sponsor for Formula D and Rally. After this news Rhys did put his 2 Rallycross cars up for sale, but not his FD Genesis. Now I’ve been doing my best to keep up with Rhys and see if there is any news on his 2013 season but all that has been said is the Grandfather of drift still feels he has some fight in him, which the 2012 season shows. Now Hyundai has announced they will return to Pikes Peak but no mention of Formula D at all. I personally thought that an OEM would reach out and try to pick up Rhys being such a big name and successful driver and with the new BRZ and Viper coming out I thought we may see one of them picking him up but no news in the least. The only thing I can think of is to see Red Bull making a larger push into FD and handling Rhys’ title sponsorship. The only sure thing is that in about 3 months we will see Rhys drifting one way or another.

Entering the 2012 season many were unsure of what Vaughn Gittin would be able to do, after winning the 2010 Formula D championship his 2011 follow up season ended with a lackluster 11th place. His first race in 2012 Vaughn showed up with his new Falken Tires & Monster Energy 2013 Ford RTR Mustang with some stunning livery and he looked like he was ready to take another run at the title. He qualified 3rd at round 1 but then amazingly gifted Odi Bakchis a win in his first match and fell out in the top 32. Vaughn Gittin Fans were not quite sure what to expect when he had a similar performance at Road Atlanta and was knocked out in the top 16. Round 3 was slightly better qualifying first, but falling out in the top 8th. But then come round 4 and 5 it seemed like the old JR was back with a new hunger taking back to back wins and putting him in the running for the championship. Vaughn placed 3rd in Vegas and was in 1st place in overall points entering Irwindale. It seemed like Vaughn had worked everything out in his RTR and wanted that 2nd Formula D Championship badly. Then in the top 8 after a pretty conservative run he unexpectedly spun out while chasing Patrick Mordaunt. All Vaughn could do was sit back and watch where he stood when all the smoke settled. In the end of 2012 Gittin finished in a very respectful 2nd place in overall points.
Now looking forward to the 2013 season with word that ASD & Falken tires were going to be splitting ways it was no surprise, at least in my opinion, when Vaughn Gittin Jr announced that in 2013 he would be partnering with Nitto Tires. With this news, the fact that Ford is now an official partner and Vaughn growing his RTR brand with them there really isn’t much to wonder about how Vaughn looks going into the 2013 season, the only things we have to look forward to is an obvious new livery now that the famous Falken scallops will not be gracing the car and how the new Nitto tires will effect his performance. Will the Nittos be enough to give JR that little bit extra to take his 2nd Formula D championship? Looks like we’ll have to wait and see.

I was going to write an article about a few of the FD drivers, what is known about them thus far in the off season, how 2012 treated them and any information we may have leading into the 2013 season, but after writing just the first one I realized it may be better as a series of posts so, here is the first of the series “What will be of Formula D in 2013”, Daigo Saito edition…

Let me start off by saying that I am not a big Daigo fan and think that Formula D’s stance on him as a Rookie is weak to say the least. However, I have to give credit where it is due: he had 4 podium finishes in his first year, 2 first place and 2 third place finishes and managed to surprise everyone and take the FD 2012 championship. He also racked up a slew of 2012 FD awards including (obviously) Rookie of the Year, Top Gun of the Year, Ace of the Year, Hardest Charging Driver, and Fan Favorite Car of the Year. What is more impressive is the fact that amongst all the other V8 NA cars he did it all in a boosted 2JZ engine pulling close to 1200HP.
Now as I am not a native Japanese speaker it’s hard for me to follow Daigo in this off season, but it has been covered on a couple other blogs that Daigo purchased Samuel Hubinette’s Dodge Challenger a little while ago. As well as there being rumors that he purchased 2 NASCAR Dodge engines a while back. There had been rumors during the 2012 season that he might be bringing a Supra to FD in 2013. During the after season there were rumors of him working on a Dodge SRT Viper, but those may have been caused by the purchase of the NASCAR v8 engines. All of this information shatters the previously safe assumption that Daigo would be sticking with a Lexus/Toyota chassis as he seems to have been doing throughout his career and from what I can tell all of the series he has been driving in. In addition, Daigo is the only driver to have driven on 4 different tire manufacturers during his career so there isn’t even a safe assumption as to what he will be driving on next season.
So it looks like as of right now Daigo seems to be, as Winston Churchill said, “a riddle, wrapped in a mystery, inside an enigma.” 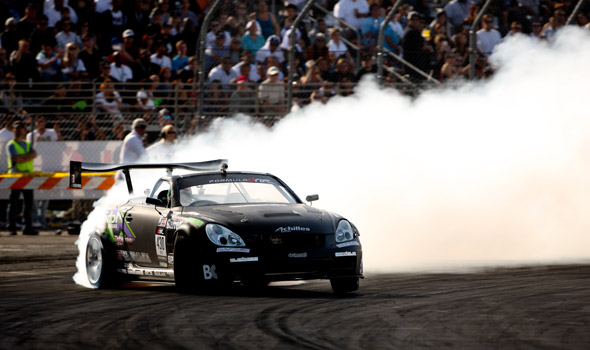