Dean Kearney teased early on Facebook a picture of his previous Dodge Viper and shortly after Wrecked talked about Deans return with the Dodge Viper that he previously drove under the V-Led sponsor. 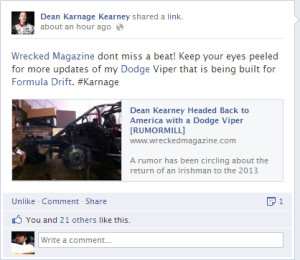 Kearney responded on Facebook and then on Wrecked’s comments confirming his return to Formula D in 2013 in the Dodge Viper with his own team. He said he will be ready for Round 1 in Long Beach, So Good Luck to Dean and glad to see you making a return after your poor luck in the 2011 and 2012 seasons.