Posted by: Patrick Walker on January 24th, 2013
It looks like some big news yesterday and today for Tangelo Racing. Yesterday Tony announced the purchase of a new permanent home for Tangelo Racing that includes 7 bays and 4 lifts. And the even bigger news was that today he announced that he will be building a Scion FR-S for the 2013 season. Another thing that makes his FR-S special is that it is a salvage from Hurricane Sandy. He also hashtagged it saying 800hp so let’s wait and see what he has in store for this puppy. So far this is the 3rd official announcement of a driver to be using a BRZ/FR-S in the 2013 season. It’s also good to note that after his less than stellar return year to FD that it looks like Scion Racing is keeping him on board. 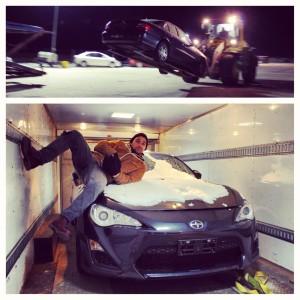