Chelsea Denofa announced today that he will be returning for the 2013 Formula D season as we all expected after a pretty successful rookie season in 2012. What we didn’t expect was that he will be returning in the BMW that he built after his crash at wall speedway and he never got to pilot in the 2012 season. This means he will be returning as a privateer driver and not with Bergenholtz Racing. It was surprising to many when shortly after the crash at wall speedway and in the middle of the Formula D 2012 season Bergenholtz Racing announced it would be splitting ways with Joon Maeng and picking up Chelsea Denofa to pilot the Nitto Tires RX-8. This announcement by Denofa confirms previous rumors that Bergenholtz would not be returning to Formula D for the 2013 season. I for one am excited to see the gold and black BMW back out there, I feel that Denofa looked much more comfortable in it and pushed his limits more. It’s also a more unique choice of platform vs the current roster of vehicles on the field. We wish Chelsea the best in the 2013 season and hope to see him on the podium soon. 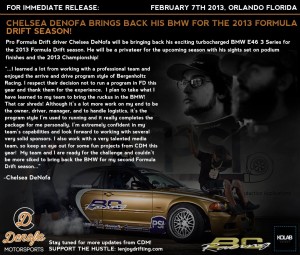