Posted by: Patrick Walker on March 31st, 2014
LORENinHD brings us the first in a series of videos he will be producing with Danny George over the 2014 Formula D season. So without further ado, here is Danny George & Friends with the rush up to Long Beach.

Posted by: Patrick Walker on March 4th, 2014
It looks like Tyler Wolfon’s will be bringing some comic book flare along with GT Radial to the 2014 Formula D season for his rookie year.

Posted by: Patrick Walker on March 4th, 2014
We have seen this in the works over the last week but could not release it until now, here is Danny George’s livery for 2014 done by Andy Blackmore Design. You will see Danny has picked up a few sponsors to put together his engine package as well as other services and support. 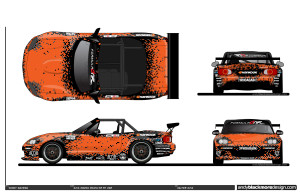 Posted by: Patrick Walker on September 10th, 2013
So a little over a month ago Danny George took to facebook asking fans to mix and match a couple STR Racing rims in different colors and designs to his miata. He also mentions in another post about a possible signature wheel idea.
A little bit of time passes and on August 31st Danny posted on Facebook “Title Sponsor for 2014…. Check”. Later that same day me has another post talking about some wider Hankook 225s on 15″ tires and how they would fit nicely on those new 15×10 wheels they are working on.
Now today he posted this picture of his Miata being loaded for Formula D Round 6 in Texas. 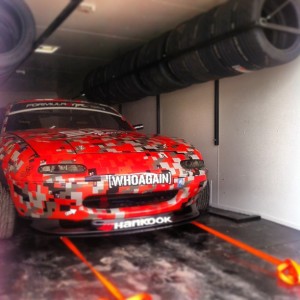 Now there has been no official word as of yet, and this is complete speculation as of now, but I do remember when the design Danny George’s Livery contest was being held there was mention of keeping the hood open for any title sponsor that may want to jump on board.
Will 2+2=4? Only Time will tell, either way it’s great to see some sponsors finally jumping on to the Bearded Bandwagon and powering Danny George forward in his Drifting Career.
P.S. We over here at Shift-Therapy may have a little surprise for you Danny George fans in the upcoming months, If you follow Danny on Instagram (@whosdannygeorge) you may have seen a preview of it already, but if not stay tuned, it may help explain why the site’s been a little sparse on updates as of late.