Matt Powers just posted a photo on Facebook of a naked engine bay in his S14 saying “This thing ripped and served me well, but was starting to get in the way of victory!” 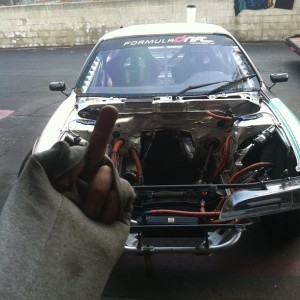 He continued in the comments by confirming he is keeping the chassis and ditching the engine. So what next? SR20DET? Or are they going to go extreme like the BenSopra 380SX that was just shown at TAS? VQ38 S14 drifting would be an interesting thing to see. Looks like we all will have to wait and find out.

Update 1-18-2013 – Later in the night Matt posted in the comments that he is going to just put in another LS but “a more built one” so it looks like any interesting combos is out of the idea for his s14.